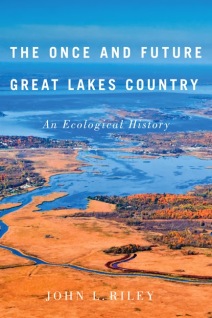 Land conservancies rightly seek to protect and preserve undisturbed natural places: the forests, marshes, shorelines, and all those pieces of nature that represent a time before human settlement.  “If only,” we say as we look at an old growth stand of white pine and imagine what the North Woods was before logging, or as we peruse an analysis of the loss of coastal wetlands. Reading John L. Riley’s “The Once and Future Great Lakes Country: An Ecological History” occasioned such thoughts, but the historical and scientific depth of the book re-aligned my understanding of the relationship between humans and the landscape, both in the past and for the work now before us.  There is much beauty to recall, and loss to lament, as we review the history of the Great Lakes, but mythologizing the past may hamper our ability to assure our future.

A Canadian Perspective is what I first expected, as the author is the Chief Science Officer of The Nature Conservancy in Canada, and as the book is published by McGill-Queen’s University Press.  And while the book takes in an enormous historical and geographic scope–from Pre-Cambrian geology to the invasion of quagga mussels, and from the upper Hudson River to the Rainy River–the point of view is from north of the border.  Of course, when considering an ecological geography, political boundaries are not helpful in making a definition; though governments can make a big difference in our ability to protect an eco-region.

For a Michigander like myself, Canada has never been far away or too foreign, but I learned a lot from this book about the natural history of Ontario and the St. Lawrence River.  John Riley starts his book with an engaging account of the history of the area around his home, a former farm in the Niagara Escarpment just northwest of Toronto.  From here, he covers a lot of geology, biology and history, but his account is grounded in a Canadian perspective. It’s both beneficial and instructive for us Americans to get out of our parochial attitudes and look at the Great Lakes from another direction.

First-Hand Accounts of Nature from early explorers and settlers, as well as early native voices, are the strength of this book, and Riley organizes these accounts both chronologically (e.g. “The Land Beyond Memory: Before 1500”) as well as by environmental topics (“Taking the Wildlife: 1500-1900”).  There are some rich details, like Cadillac’s 1701 description of the bison seen in the area southwest of Lake Erie, a “boundless prairies (with) mighty oxen which are covered with wool.”  Or the late 18th Century account of Lady Simcoe’s visit to Niagara Falls in which she encountered hundreds of rattlesnakes in the cliffs.  Riley notes that before hydropower diversions, the water in Niagara River measured 25 feet deep (or high?) as it flowed over the Falls.

I was particularly impressed with the accounts of the fecundity of fish, like the large schools of Atlantic salmon found in Lake Ontario, six foot sturgeons in Lake Michigan, and the native catch of whitefish in Sault Ste. Marie, “easily enough to feed 10,000 men” according to one 1669 eyewitness.  Riley also writes about the Iroquios nation’s reliance on the eel, noting that settlement patterns of the tribes around Lake Ontario are defined by the highest upstream migration of eel. The stories of the great productivity of fish as food stock in the pre-historic Great Lakes are wistful background to todays news accounts about the struggles to re-establish lake trout or sturgeon.

The Re-Wilding of the Great Lakes.  On land as well as water, wildlife abounded in the Great Lakes region, and Riley investigates the role they play in the regional ecology.  For instance, the now extinct passenger pigeon, traveling in enormous flocks, helped foster a diverse forest of nut- and fruit-bearing trees which provided foods, as did the pigeons, to other animals. The proliferation of animal life in the Great Lakes region prior to European contact also supported a Native American population that was equally diverse in its culture and complex in its use and impact on the land.  My mental picture of the 16th Century landscape is influenced by the history written by those who subsequently occupied it, so I imagined an unbroken forest primeval. Riley more accurately recounts a pre-settlement landscape that was in many places home to large villages, used for mixed agriculture, and actively burned and cleared to support the hunting of wild game.

A Great Lakes region where humans lived in balance with nature changes after 1500 as disease eliminates most (estimates range from 75 to 95 percent) of the native population, the European demand for fur and resources redefines the use of the land, and war and conflicts directs the movements of both native and white populations.  For instance, by the 17th Century, “the expulsion of Native nations from the Ontario peninsula and around Lake Erie, combined with the relative collapse of Iroquoia as well, changed the ecology of the region. A culture of sophisticated, place-based farming and wildlife harvest was finished, as was its stewardship of the broader landscape for humans and wildlife alike.”  The landscape re-wilded, and by the 19th Century the Great Lakes region was a dense forest that was unnaturally devoid of human habitation, probably reduced in wild game, and less diverse in its landscape and life.

A Complex Relationship exists between humans and nature, both in Canada and the United States (and everywhere else!). “The Once and Future Great Lakes Country”details the historical and the current, the negative and the beneficial aspects of our dependence and use of nature.  Perhaps the best part of the book is the final chapter “Restoration”which provides perspective and direction to the many efforts to protect and preserve natural areas, revitalize wildlife and fisheries, and establish greenbelts.  While I wished for more detail on the history of the Nature Conservancy in Canada (a separate legal entity from The Nature Conservancy based in the US, the organization for which I volunteer) there are several accounts of its saving important places in Ontario.  Impressively, a totaling of public and private acres protected in the Great Lakes basin on the Canadian side adds up to 12 percent of the land.  As Riley notes, “this tithing for nature reflects a sea change in civil society.”

Reading this book made me rethink my conceptions of the natural and human history of the Great Lakes.  And while the accounts of what is now lost sadden me, I am heartened to find historical affirmation for the positive role humans can play in nature. “The lessons of pre-contact stewardship–polyculture, native species, promoting wildlife–are being relearned and retaught.”  The ecosystems of the Great Lakes are not just pretty to look at and play in (though they most certainly can be), they are also vital to our sustenance and health, our economic well-being, and our own sense of identity.  We need to restore nature not only to recreate our history, but to protect our future.

Next week:  an account of a winter visit to a new preserve in Michigan’s Upper Peninsula