In 2005, Michigan’s Upper Peninsula (the UP) began a new relationship with the natural resources that so define it as a place.  Recently, I revisited the site that memorializes that moment, returned to a Lake Superior beach that shaped my relationship to the Great Lakes several decades ago, and thought a lot about the future of the UP.  Having with me my daughter in this natural wonderland made me think hard about what legacy this generation will be leaving to the next.

The Big Deal was what it was called in 2005 when The Nature Conservancy finalized (after many years of hard work) a large, innovative, and very complex deal to protect over 271,000 acres of forestland in the UP.  While the tradition of land conservancies is to buy land to protect it, this old strategy applied to less than 10% of the land in the Big Deal. The large majority of the Northern Great Lakes Forest Project, the official name of the multi-party deal, was land kept in private ownership with conservation easements that prevent development.  Timber investors own the land, and logging continues, but with limits. Importantly, the Big Deal properties remain on local tax rolls and remain open for public use by hunters, anglers, birdwatchers, snowmobilers, and others who go to the northern forests for recreation.  The goal was sustainable use and permanent protection, and seven years later the promises are being realized.

Tina Hall, who heads up The Nature Conservancy’s office in Marquette, believes the Big Deal will be “one of the most impactful actions” taken by the organization.  Not only because of the vast forests conserved, but also the more than 660 lakes and 517 miles of rivers streams that will forever be available for the public’s enjoyment.  But protection was only the first benefit and the first step.  “This effort is much more dynamic than people realize” says Helen Taylor, Executive Director of The Nature Conservancy in Michigan.  “We are continuing to advance the initiative by showing that sustainable forestry practices can be profitable and more.  Restoring a healthy, diverse forest will enable the UP to provide for future generations.”

The most intriguing part of the project may be the 23,000 acre Two-Hearted Forest Reserve.  Note the language–this is a “reserve” not a “preserve”–and The Nature Conservancy is actively involved in logging the land it owns in cooperation with local timber companies.  The forests are being professionally managed to improve biological diversity and protect water quality in the Two-Hearted River watershed.  The most significant aspect of the Big Deal for the future of the UP is that it balances both economic benefit and environmental protection.

The Middle Ground claimed by the Big Deal seems too rare these days.  “Environmentalist” is now a term used critically by those who experience regulation as a constraint on economic growth, and public land protection is not favored by critics of the size and power of government.  Feeling under attack, those who value ecology and wilderness take more absolute positions when debating protection of natural areas.  This is very true in the UP, where the economy has not been healthy and where large areas of forests and scenic shoreline remains undeveloped, and rivers run free and clean.  The debates have become more sharp in recent years, with vigorous campaigns and lawsuits against new development occurring simultaneously with legislative efforts to curtail public agencies in their role to protect the environment.

The choice about conservation seems to be framed as “use the UP’s natural resources to promote job growth” vs. “save the (insert natural feature name here).” Sitting in the center of the Two-Hearted Forest Reserve at the Big Deal dedication site, I thought about a middle way that says “use the natural resources, but do it in such a way that the health and beauty of the UP is not lost.”  This path is more of a challenge to follow, because it requires economic analysis, reasoned policy debates, and solid data based on good science.  It also requires effective public and private institutions that have the trust to engage all affected parties and the wherewithal to be able to carry out complex solutions.  Taking one side or the other may be more popular, or may yield some short-term gains, but in the end I worry about whether we might lose altogether what makes the UP special.

Pictured Rocks National Lakeshore has long been one of the special places of the UP to me.  I first encountered it more than three decades ago when, as a college student, I headed off into the wilderness with several friends for a backpacking trip.  I recall a glorious day spent on Chapel Beach, climbing its namesake rock, swimming in the cold surf, and building a bonfire a night.  Shortly thereafter, the National Park Service sought comments on a management plan.  I wrote an impassioned letter, arguing that the few existing access roads be taken out, and that proposed user amenities not be developed; I got back a response saying my comments would be taken as support for the “maximum wilderness option”, or something like that.  In the end, a middle path was struck, supporting some expansion of access, but tightening wilderness protections as well. 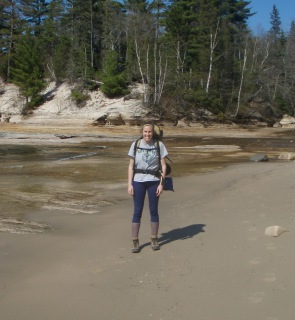 Last week I camped at Chapel Beach again, after getting a permit at the informative multi-agency center in Munising.  Campfires are now prohibited, as is climbing on Chapel Rock, both actions taken to minimize the impact of visitors and preserve the ecological integrity of the well-visited site.  On the one hand, I was wistful that my college-aged daughter could not experience the Lakeshore the way I did for the first time.  But I also realized that the new rules are a smart and reasonable way to protect natural resources.  Regulations can be a good thing.  The “leave no trace” tag hanging on my daughter’s backpack attests to the ethics of her generation that align with these rules.

We backpacked in and out the long way, via Mosquito Beach, and felt we earned a nap in the sun there. We did meet several day-hikers who could reach much of the scenic cliffs after a short hike from a parking lot currently being upgraded and expanded.  I thought about the increased number of visitors to Pictured Rocks made possible by recent road improvements and other public investments.  I know that it is good for the economy of the UP, and the Lakeshore’s popularity continues to draw visitors from throughout the world.  On our trip we talked with two young couples on an outing, a group of five men from Chicago on a spiritual retreat, and a park volunteer who retired to the area because of its beauty.  Rather than resenting their presence, I felt a joy at being able to share in our love for the UP.

The Future of the UP must be based on a recognition of its past.  For several hundred years, we have been using the UP.   Its natural resources brought people to the UP and still sustain a cherished way of life; making use of nature will continue in the UP.  Several times, however, we have used the UP so hard that hillsides were torn down, the waters fouled, and the soil literally burned away.  In response, abandoned lands were recovered by the State and Federal government, and the scenic beauty of the forests, swamps, rivers, lakes, and coasts restored.  The UP has always, and increasingly, attracts people because of the uniqueness of its natural resources.

The questions about the future of the UP should not be a debate between using it or losing it.  Rather the questions need to be about “How?” and “Where?”  How and where should we protect scenic lands?  Some areas not now preserved should be saved, perhaps through public acquisition, perhaps through creative approaches like the Big Deal.  How and where should we log?  Timber is a sustainable resource, and we need to bring our best science and economics to the question to ensure both the creation of jobs and the protection of the resource.  How and where should we mine? This is the newest question to perhaps the oldest problem, one we are still grappling with; it is the most important one that needs answers.  All of these questions and more need to be addressed not only for our benefit today, but for the legacy of generations to come.

Watch a video that explains the history, the significance, the and legacy of the Big Deal:  click here 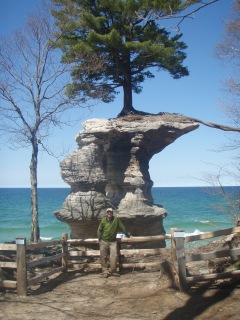 To Visit.   The Dedication Site for the Northern Great Lakes Forest Project was relocated to the McMahon Preserve north of Newberry in 2015. Find directions and more information at the Michigan chapter website.

The Nature Conservancy protects a number of other special places in the UP, from Drummond Island in Lake Huron to Horseshoe Harbor on the Keweenaw in Lake Superior.  You can find details and directions at

thanks Abbie for the photos and for the trip!