Aren’t they all swamps? I thought as a scientist for The Nature Conservancy explained the two different types of wetlands we were going to see on a recent outing, and explained how they were both different from the moist areas I had seen on my trip to the Saugatuck dunes. I was swatting mosquitoes with a group of other non-scientists at the entry to the Ross Coastal Plain Marsh Preserve in southwest Michigan. “No, the water in the marshes here comes from rainwater and runoff, the wetlands in the dunes area are a result of rising and falling lake levels,” explained John Legge. Thus, I understood why some of the wetlands in Saugatuck were drying up, because Great Lakes water levels were at historic lows, while the marshes here just a few miles inland were overflowing due to the wet summer in the area.

It is this kind of precision and careful attention to the details of our environment that is a hallmark of The Nature Conservancy (TNC). I was on an outing with the philanthropy team of Michigan’s TNC office, who are professionals in their own endeavors, but who understand the need to get the science right. On our trip we were going to learn the difference between a marsh and a fen, two very different types of wetlands.
The 1,254-acre Ross Preserve contains several marshes tucked into low openings among forested ridges that are the remnants of dunes several thousand years old. These wetlands fill up fast and drain slowly; usually by August they have dried up considerably. But on our outing we stood on the shore of small ponds and talked about the unique co-location of tupelo trees and eastern hemlocks. The Nature Conservancy protected this area because of the unique marsh plants that grow here, at least eight of which are rare and endangered in the Great Lakes. A non-expert like me could be alarmed because none of these plants were found on our outing. However, their seeds were lying dormant in the mud at the bottom of the pond waiting to be exposed as the water retreats. Sometimes these annuals will have to wait two or three seasons before they sprout, flower, and go to seed to sustain the cycle. 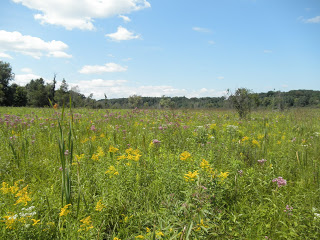 What is a Fen? After a shared lunch, we headed west to a very different wetland, the Paw Paw Praire Fen. Unlike a marsh, which collects and holds surface water, a fen is a unique wetland created by the underground flow of water that seeps to the surface, usually forming the headwaters of a stream or river. Fens are always wet, and with rubber boots on, we stood in the first waters of the beautiful Paw Paw River and looked at very different plants, several unique butterflies drawn to these plants, and almost no trees. Not only was the feel and look of this wetland different, the water is different. Coming up from limestone areas, the water contains more calcium and other minerals, which supports its own rare plants.
The Paw Paw Prairie Fen was recently established and the preserve saved the area from neglect and an imminent residential development. Since 2004, The Nature Conservancy has extensively surveyed the area, removed invasive buckthorn which soaks up water, and restored some surrounding eroded areas with the help of volunteers from the Coca-Cola Company who have a juice bottling plant in the area. This fen is an important place not only because of its special ecology, but also because it is preservation helps maintain the water quality and quantity of the Paw Paw River. The Nature Conservancy is also at work to protect the Paw Paw and its agriculturally dominated watershed, which is important to the farmers who grow a variety of crops in the area, to cities and companies, like Coca-Cola, who rely on the groundwater of the area, and to residents who recreate and identify with the River. It is an important place.
Wetlands and Science. So what is a swamp? Not anything I saw on my outing. Technically a swamp is a wetland in which trees grow. Think of the Okefenokee Swamp with its large cypress trees. A bog is where the accumulation of organic material exceeds decomposition and peat forms in an acidic environment; a fen has a balanced or alkaline pH. All of them are wetlands, which has a more legal than scientific definition. Those government agencies charged with protecting the environment use the term wetland: “wetlands” means those areas that are inundated or saturated by surface or ground water at a frequency and duration sufficient to support, and that under normal circumstances do support, a prevalence of vegetation typically adapted for life in saturated soil conditions. Wetlands generally include swamps, marshes, bogs, and similar areas.
On one level, the definition of a fen versus a marsh versus a swamp is so much nature trivia. However, the fact that scientists not only understand the difference but also use this knowledge has profound implications for conservation. When we use science to inform our decisions about where to build house, how to grow what where, how much water to take out of the ground, and where to raise precious dollars to preserve land, then all of our decisions will be better. And when we can make better decisions, than we can support multiple goals and all achieve more together. 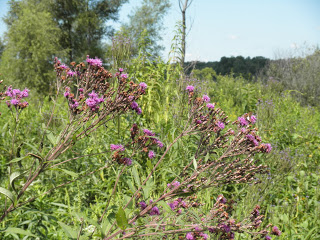 How to Visit. Ross Coastal Plain Marsh is near Watervliet. Take M-140 north 6.6 miles from the I-94 interchange to CR 376 (44th Ave.). Go west 3.3 miles to a dirt driveway and small parking area across from Dune Lake Campground. An old two track leads into the preserve and several of the marsh areas are less than a mile walk.  For more information visit this part of the TNC Michigan Chapter’s webpage
The Paw Paw Prairie Fen can be found southwest of Kalamazoo.  Take I-94 west to the Mattawan exit, turn left on S. Main and continue to 64th Avenue. Turn left (east) to 22nd Street and turn right (south).  In approximately one mile the parking lot will be on the right side.  More information and a  map can be found on the TNC Michigan Chapter’s webpage.